The early detection and treatment of fungal meningitis and pneumonia can save hundreds of thousands of lives, for a cost of ‘only $30’ per HIV patient, the world’s first stakeholder meeting on fungal diseases has concluded. The meeting in Seattle, was hosted by GAFFI (Global Action Fund for Fungal Infections) and held in Seattle. Policy makers, doctors and researchers from around the world called for immediate action on fungal infections to save lives across the world.

Currently about 1,500,000 people die of AIDS and its complications each year. Probably 25-33% die of fungal infections, although exactly how many is not clear because of a lack of access to effective diagnostic tests. Over 400,000 are thought to die of aspergillosis complicating TB, yet diagnostics are not available in many countries. Over 60 experts from major health agencies, including the World Health Organisation, UNAIDS, Bill and Melinda Gates Foundation, Office for Global AIDS Coordination (PEPFAR), Centers for Disease Control –– and representatives from over 30 countries –– gathered to align efforts to improve management of fungal infections. 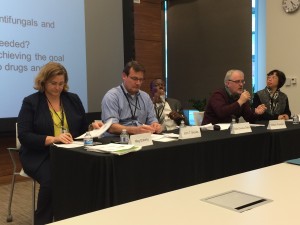 Participants highlighted the lack of diagnostics and access to treatments, including the oldest antifungal drugs, are major hurdles to improvements in many developing countries. A  preliminary economic model to analyze costs associated with treatment and care of fungal infections in Africa was introduced at the meeting. The model indicated that early screening and treatment, before meningitis or pneumonia develop, is cost effective and could save patient lives. If implemented, this regimen could potentially save $500 million and up to 140,000 lives annually compared with later treatment. TB is second only to HIV/AIDS as the greatest killer worldwide due to a single infectious agent.

A common complication of TB is ‘Chronic Pulmonary Aspergillosis’ a lung fungal disease that mimics TB, and needs to be treated with antifungal drugs. Diagnosis requires a simple antibody test, which is not available in many countries, especially in Africa. Incorrect diagnosis and treatment is therefore a common occurrence. An estimated 1,200,000 people suffer from this complication of TB, and most are never diagnosed or treated. GAFFI recently petitioned the WHO to make the key oral drug for this infection, itraconazole, an Essential Medicine.

GAFFI President and Professor of Infectious Diseases in Global Health at the University of Manchester, Dr. David Denning, convened the meeting in Seattle. Denning commented: “The toll due to fungal diseases is over 1 billion people, yet these diseases are poorly represented by most global health organizations and national public health bodies. Burdens vary by geography, country, co-infections, hospital hygiene and agricultural practices. Even though the global antifungal pharmaceutical market is about $8 billion and growing at 2-3 per cent annually, there are a limited number of useful antifungals”. Denning continued, “Discussions covered so many of the gritty problems facing patients unlucky enough to develop a serious fungal infection. From lack of knowledge amongst doctors, slow or non-existent diagnostics, to costly or unavailable generic antifungals. The time for action and alignment among AIDS and TB policy makers is now.”

Stakeholders jointly committed more action, collaboration and serious attention to the topic. “More should be done to reduce deaths” – Dr Swarup Sarkar from UNAIDS on the eve of the meeting said “Many people living with HIV are starting anti-retroviral treatment too late and die prematurely as opportunistic infections take hold. This can be prevented if efforts are urgently scaled up to ensure the timely diagnosis of HIV as well as early screening and treatment of opportunistic infections.”