Mycetoma is a chronic granulomatous deep mycosis that causes debilitating lesions, caused by fungal or bacterial implantation through the skin. In Uganda, Richard Kwizera, Dr Felix Bongomin and colleagues in Kampala published a 69 year retrospective study of all biopsy reports produced by the Pathology Reference Laboratory at Makerere University from 1950 to 2019 (249 cases). 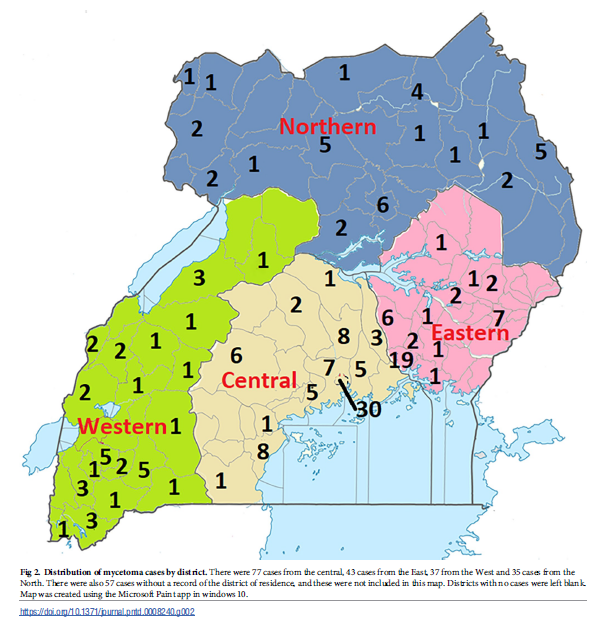 Cases were analysed by district and by tribe, with cases being more prevalent in the central and eastern regions. They estimated an incidence of 0.32/100,000 persons, and a prevalence of 8.32/100,000 persons per decade. Only 45% were correctly diagnosed prior to biopsy, and 15% were initially misdiagnosed as Kaposi sarcoma. They also did a systematic review of the literature from Uganda.

Dr Aïda Sadikh Badiane and colleagues mapped mycetoma cases diagnosed at the Parasitology-Mycology Laboratory of CHNU in Dakar (Senegal), from registers covering 1993-2000 and 2005-2016. 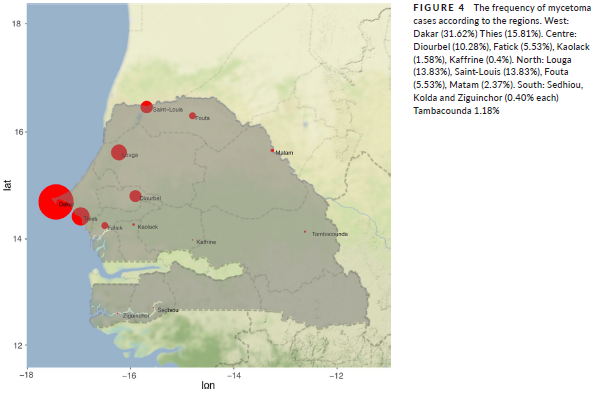 They identified 253 Senegalese cases with corresponding geographical data, which were analysed at the level of the climatic zones and to their sub-regions. Distribution followed a north-south gradient, with few cases occurring in the wetter southern zone, and more cases seen in areas with spiky plants. Overall, eumycetoma (fungal) was more common (61%) than actinomycetoma (bacterial). The authors suggest that many cases from poor rural areas are missed due to lack of access to healthcare, particularly as all mycology labs in this country are located in Dakar.

Epidemiological data are essential to guide management programmes and in order to advocate for better availability of antifungals. An estimate of global burden of disease was made several years ago (van de Sande 2013), which contributed to mycetoma being added to the WHO’s list of neglected tropical diseases in 2016. These two new papers refine the geographical prevalence rates for Uganda and Senegal.

Read the paper: Badiane et al (2019) Geographical distribution of mycetoma cases in Senegal over a period of 18 years