Today, May 5th at the ISHAM conference GAFFI has launched  the project ‘95-95 by 2025’ at Melbourne in Australia, calling on all national governments and public health agencies to reduce the toll of death and blindness from fungal diseases. 95-95 means 95 percent of patients with life or sight-threatening fungal disease are diagnosed and 95 percent treated. Currently the figures are at best 50 percent and, at worst, as low as one in three. 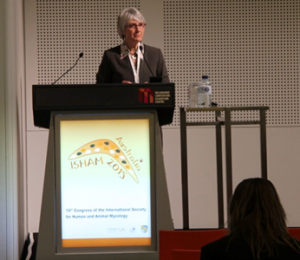 Significant advances in diagnostics for fungal pneumonia and meningitis have been made over the last 15 years, but are only available in a few countries. One key antifungal drug is amphotericin B, which first used in 1959, but it is still not available in 76 countries, despite it being critical for the treatment of fungal meningitis. Alternative antifungals drugs are either not available or are excessively expensive in many countries.

GAFFI attributes part of the responsibility to those public health authorities and major health agencies that have failed to recognize the huge and avoidable toll of death and blindness, attributable to fungal diseases. The importance of chronic and allergic fungal infections has been overlooked for years, and will be responsible for over 500,000 deaths each year. Similarly, AIDS-related fungal infections are responsible for up to 700,000 deaths (nearly half the total number of AIDS deaths), and could be halved rapidly if diagnosis and treatment were made available immediately.

At the launch meeting, hosted in Melbourne by the International Society for Human and Animal Mycology, Dr David Denning, President of GAFFI, and Professor of Infectious Diseases in Global Health at The University of Manchester said: ‘We propose a systematic approach to greatly reducing deaths and disease from fungal disease, using tried and tested rapid diagnosis and antifungal therapy. We recognize that health ministers in all countries have many demands, but the loss of life and sight of the some of the most productive and active members of society, is economically and socially disastrous.”

Professor Tania Sorrell, Director of the Sydney Institute for Emerging Infectious Diseases and Biosecurity, who chaired the launch, commented: “95-95 by 2025 is a bold and necessary call to action for fungal disease experts, the diagnostic and pharmaceutical industry and the public health community to really make an impact, especially among the disadvantaged in the world.”

Professor Mike Turner, Head of Infection and Immuno-biology, and acting head of Population Health at The Wellcome Trust added: ‘There are several very serious diseases caused by fungal infection, many of which are extremely difficult for doctors to treat. GAFFI are bringing a new energy to raising the profile of fungal infections and highlighting the need for a renewed international effort to care for people who suffer from them.’