Mycetoma is a chronic, progressively destructive morbid inflammatory disease usually of the foot but any part of the body can be affected. Infection is most probably acquired by traumatic inoculation of certain fungi and  ‎bacteria into the subcutaneous tissue. Mycetoma was described in the modern literature in 1694 but was first reported in the mid-19th century in the Indian town of Madura, and hence was initially called Madura foot and commonly affects young adults particularly males.

As mycetoma is a badly neglected disease, accurate data on its incidence and prevalence are not available, the organisms that cause it are found  worldwide but it is particularly endemic in Chad, Ethiopia, India, Mauritania, Bolivarian rep. of Venezuela, Mexico, Senegal, Somalia, Sudan and Yemen. More than 20 species of fungi and actinomycetes are implicated in this disease. Mycetoma is currently not a notifiable disease.
Thanks to the hard work of members of the ISHAM working group Mycetoma,  and the Mycetoma research Center in Khartoum, this fungal infection is now on the WHO List of Neglected Tropical Diseases. (Link)

Professor Rod Hay of the International Foundation for Dermatology said; “Mycetoma has long been a neglected infection, partly because of its rarity, partly because of its geographical isolation in poor communities and partly because of its diagnostic and treatment complexity. It is a real milestone forward that the WHO have agreed to accept it as a Neglected Disease, and hopefully this will drive substantial improvements in care for these disabled and stigmatised patients.”

The disease is common among barefoot populations who live in rural areas in endemic regions but no person is exempt. Transmission occurs through a minor trauma like a thornprick.  Mycetoma is characterized by: a painless ‎subcutaneous mass and sinus discharge ‎containing grains or specifically fungal filaments. It usually ‎spreads to involve the skin, deep structures and bone resulting in ‎destruction, ‎deformity and loss of function, which may be fatal. ‎ Mycetoma commonly ‎involves the extremities, back or gluteal region.‎

Given its slow progression, painless nature, massive lack of health education and scarcity of medical and health facilities in endemic areas, many patients present late with advanced infection where amputation may be the only available treatment.

In May 2013 the World Health Assembly adopted a resolution urging all member states to commit to specific measures regarding all neglected tropical diseases on the WHO list. This included country ownership of prevention control and eradication programmes and achieving universal access to effective interventions.  Link 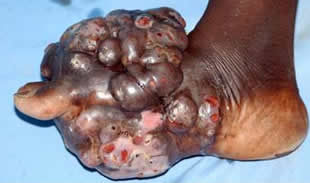 WHO image of mycetoma of the foot