About 2 billion people have no access to modern medicines, according to the Access to Medicines Foundation’s Founder and CEO Wim Leereveld. In a perspective piece in the New England Journal of Medicine, Hans Hogerzeil of Groningen, also in the Netherlands, reviews the 2012 index rankings of the major global pharmaceutical companies in terms of their efforts to make their products more available, affordable, and accessible in developing countries. 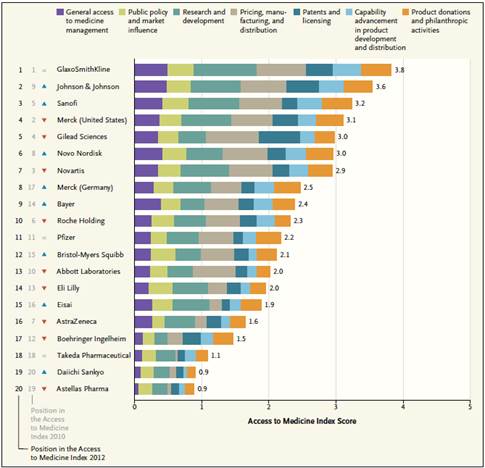 The Foundation sees the companies as being a key part of the solution to improving access, but the index extends further than simply provision to include commitment, transparency, performance and innovation in addition Hogerzeil writes: “The index focuses on what companies do to bring medicines, vaccines, diagnostic tests, and other health technologies to people in 93 low-income and lower middle-income countries, plus 10 upper-middle-income countries with large within-country disparities in development, such as Algeria, China, Jordan, South Africa, and Thailand. Companies’ rankings take into account drugs for a number of specific diseases, including the 10 communicable diseases and 10 noncommunicable diseases that account for the highest disease burden in developing countries, 14 neglected tropical diseases, and a range of maternal and neonatal conditions.” View article

The index does not include any antifungal agents, which is not a surprise as the most generally useful agents are for low and middle income countries are generic. Pfizer’s fluconazole donation program is important in many countries, and not apparently recognized in the listings.

The Index also does appear to address the role that generic manufacturers could play in improving access to medicines, and indeed do play, many manufactured in India. The next index is due out in 2014.