New burden estimates from France, Jamaica, Mongolia, Korea, Sri Lanka, The Dominican Republic, Trinidad and Tobago, Iran, Guatemala and Zambia – covering a total of 262 million people, have been presented at the Trends in Medical Mycology conference on Oct 11-13th in Copenhagen. Previously, estimates of the number of people suffering and dying from fungal infections came from only  12 countries (ECCMID, April, 2013). These first estimates from the Caribbean and Central America uncover huge numbers affected by allergic fungal disease in asthma, and histoplasmosis in AIDS.

Estimates from Guatemala, where HIV incidence is high and patients present late, show histoplasmosis and cryptococcal meningitis are the major causes of HIV related deaths. They have no Pneumocystis diagnostic capability, unfortunately. Overall estimates from Jamaica  (population 2.7 million) indicated that 75,000 individuals will have a serious fungal infection compared with Trinidad and Tobago (population 1.3 million) in which 33,000  patients are affected, with HIV-related fungal infections predominating. 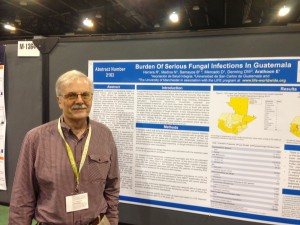 E Arathoon at his poster.

Data from the Republic of Korea estimated the current burden of serious fungal diseases at 961,705 cases every year or 1.9% of the Korean population, with estimates for chronic pulmonary aspergillosis of 146/100,000. As asthma is relatively common, ABPA and SAFS are too: ABPA rate of 95/100,000 and SAFS of 125/100,000 both comparable to rates in European countries. Notably, the Republic of Korea had a much higher incidence of oesophageal candidiasis (266/100,000) whilst recurrent candida vaginitis cases were 2,716 per 100,000, – consistent with many other countries including Mongolia.

Similar estimates in Sri Lanka indicate that candidaemia and invasive aspergillosis are the leading causes of fungal-associated deaths with the total estimated serious fungal disease burden in Sri Lanka of 56,687. Fungal related morbidity is mainly attributable to SAFS, ABPA and chronic pulmonary aspergillosis.

Data from France was not modelled, but gathered from patients discharged from hospital over a 10 year interval. The underlying trends of fungal infections reflected the different risk populations and changing immune status. Overall 35,876 incident cases were documented from 2001 to 2010.

The data presented from these 10 countries underpins the geographical diversity of serious fungal diseases and differing prevalence in these countries. The need to gather full epidemiological data has never been more necessary to address the numerous diagnostic – and therefore treatment- gaps  in serious fungal infections.