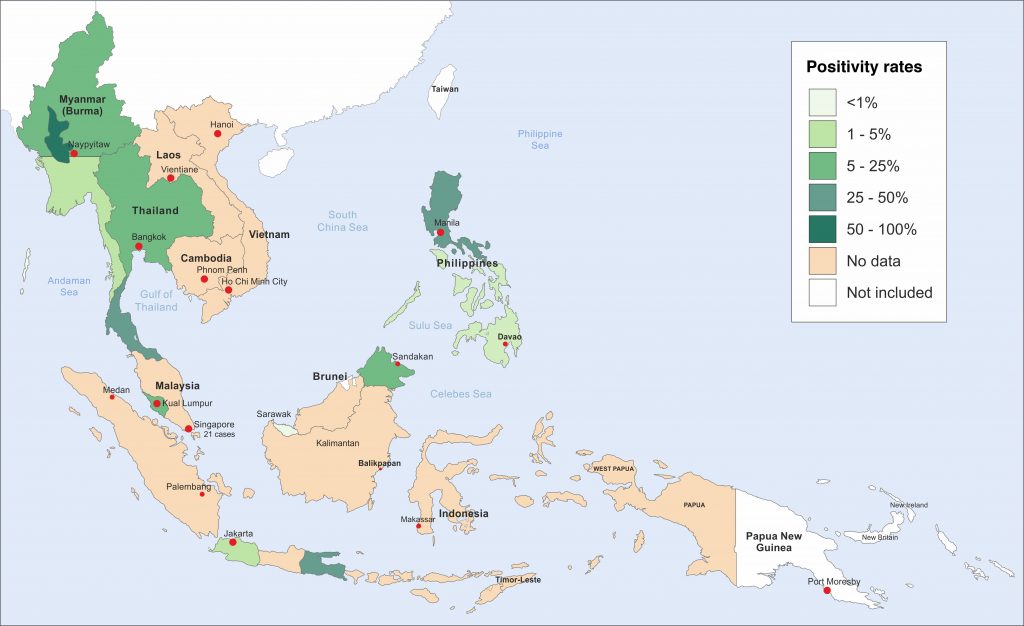 While clinically recognized locally in some centres in SE Asia, the full extent of histoplasmosis has been obscure until now. Jacob Baker at the University of Manchester and colleagues in Jakarta (Indonesia) have unearthed numerous locations with very high rates of histoplasmosis.  Areas of high histoplasmosis exposure, using histoplasmin skin test sensitivity prevalence, were found in: Rangoon (27.1%) and Maguee (86.4%) in Myanmar; Kedisan, Bali (63.6%) and Surabaya (32%) in Indonesia; Ho Chi Minh City in Vietnam (33.7%); southern Thailand (36%); and North Luzon Island in the Philippines (26.0%).

Prof Retno Wahyuningsih of the Universitas Indonesia and Universitas Kristen Indonesia in Jakarta, GAFFI Ambassador and co-author of the study declared:

“ We know we have cases of histoplasmosis in Indonesia, but there are probably very many more than are diagnosed. We are currently skin testing with histoplasmin across the country to improve mapping in Indonesia. These maps will enable us to gauge the magnitude of the histoplasmosis problem and help decision makers to address it ”

Unfortunately the cases of histoplasmosis reported from the region do not reflect the high endemicity rates, despite many HIV-infected patients. Thailand tops the list of reported cases (233), with only 76 cases reported from Malaysia, 48 cases from Indonesia, 14 from the Philippines and 3 from Myanmar. The authors only accessed papers in English and Indonesian, so some locally reported cases may have been missed. But this disparity in caseload implies gross mis-diagnosis. About 43% of reported cases were in HIV positive people. Estimates of the number of annual HIV-related cases have been published (see GAFFI website) for Thailand (32) and Malaysia (175), but were not possible for Vietnam or Philippines due to lack of data.

Enabling rapid diagnosis with Histoplasma antigen detection, now that this test is a WHO Essential Diagnostic is very important in SE Asia to reduce the death toll from disseminated histoplasmosis.

The study was funded by the Newton Fund in the UK and Indonesia.